Pep Rally is Held in Spirit of Titan Nation 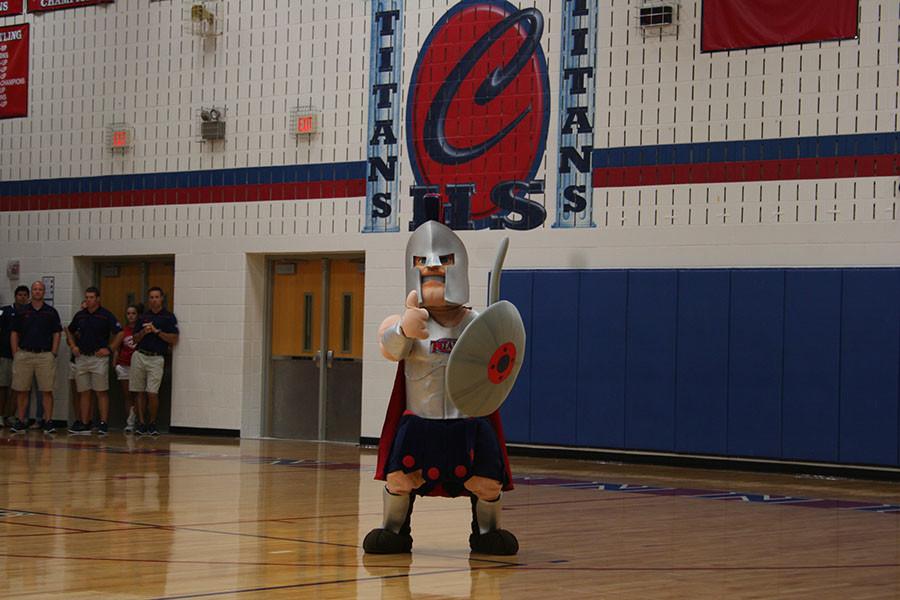 As most teenagers were trying to squeeze in their last bits of summer by sleeping in or hanging out with friends, the Centennial Football team and their biggest supporters, parents, cheerleaders, band and color guard gathered together in the competition gym on Saturday, August 23, to participate in a kickoff pep rally for the upcoming football season. When I entered the gym I was greeted with the rush of people hurrying to their seats, the band playing in the background and cheerleaders pumping up the crowd.

The pep rally started off with a warm welcome from Stu-Co Sponsor Mitchell Reeder and the National Anthem sung by sophomore Kendall Bowser. The Sweethearts were in a two line formation assisting the cheerleaders to get the crowd excited. All of Centennial’s football teams were introduced, Freshman Red, Freshman Blue, JV and Varsity, and then took their seat on the bleachers across from the fans. A motivational speech was given by the new football Head Coach, Ronny Mullins, about the anticipated upcoming season. Following Coach Mullins, a brief speech about the history and importance of the Tom Landry Classic was given by Kris Cummnock.

An overall surprising moment was when the 2015-2016 Centennial High School Football Captains were revealed. Congratulations goes out to seniors Alec Melkovitz and Anthony Pegues’.

Finally, as the pep rally came to a closing, the cheerleaders and Sweetheart lieutenants gave excellent performances to upbeat music and the band played the Alma Mater while everyone raised their “C”s up high.