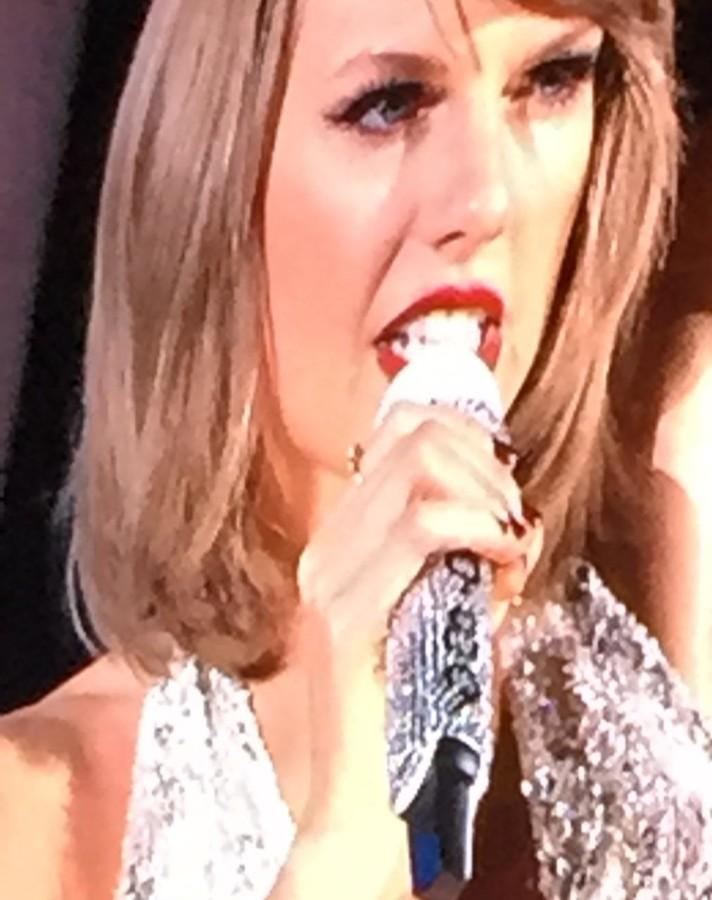 Taylor Swift performing at the AT&T Stadium in Arlington, TX on Oct. 17.

Taylor Swift is one of the most successful and widely known artists in the music industry. She’s become so successful, in fact, that she’s been able to sell out Arlington’s AT&T Stadium—which seats nearly 60,000 people—four times. And I had the privilege of getting to see her perform her incredible 1989 tour. And yes, you should be jealous, because the show was like a giant, up-beat dance party hosted by one of the biggest pop performers in the world.

Here’s how it got started. I hustled into the stadium with thousands and thousands of other teenage girls with their mothers, sisters, best friends, and the occasionally dad, brother, or boyfriend who somehow got dragged along to the fangirl fest. Although, let’s be honest, even the guys found themselves jamming out to “Shake It Off” by the end of the show. Nearly everyone seemed to have shown up in various costumes involving tutus, cat ears, lit-up signs, and there were even a couple of impressively accurate Taylor impersonators in the mix. Everyone was dressed to party.

After waiting in line for around thirty minutes for a hot dog, fries and soda (which was actually delicious and totally worth the wait) my mom and I took our seats and noticed all the seats had a strange-looking bracelet taped to the back. We wouldn’t find out what these were for until later.

In an instant, Shawn Mendes walked on stage. Que the extremely loud, fangirlish screaming. I was in absolute awe, as I’d been a huge fan of Mendes’ for a few years now and was absolutely psyched to see him live. But nothing could’ve prepared me for when he came on that stage, with just his guitar and angelic voice. My jaw dropped instantly with the first notes of his stunning ballad, “Life Of The Party.”

For those of you who are unaware of the great talent that is Shawn Mendes, he is a seventeen-year-old singer-songwriter who went viral doing a cover of Justin Bieber’s “As Long As You Love Me” on Vine. Like Bieber, he got his start on social media, using Youtube and Vine as his platform, and is also Canadian. Mendes’ biggest hit thus far is “Stitches,” which is very likely that song you’ve been hearing on all the radio stations constantly and can’t get out of your head. If you haven’t heard any of his other songs, I highly recommend you look him up. Anyways, I was dumbstruck at how incredible he performed live, and I didn’t think it was possible, but he sounded even better than he does recorded. Even when he left the stage, I was still shaking with elation and giddiness.

After Shawn, Vance Joy performed, and although I was not familiar with his music, I was quickly charmed by his humbleness, curly hair and lovely Australian accent. He’s also very handy with a guitar and had a sort of laid-back, chill, earthy vibe that I took a liking to easily. I didn’t actually recognize who he was until his last song when he performed his biggest tune, “Riptide,” which has also been taking over the radio. I was pleasantly surprised as he performed each of his songs with passion and awesome talent, yet still he showed winsome modesty. I may have come to the show not knowing his music, but I left knowing that I had to check out his work, and I did.

Finally, when Taylor came on, I was not emotionally prepared at all. Although I was pumped from her two astoundingly amazing opening acts, I was not ready when she burst onto the stage belting out “Welcome to New York.” It was surreal to see such a huge internationally known artist live in front of my eyes. After finishing the first song, there was this incredible, still moment when Swift looked stood in the center of the stage, smiling in awe at the 60,000 of us beaming with excitement and indescribable energy.

The rest of the show consisted of some excellently choreographed songs, gorgeous, sparkling outfits, and one particularly slowed down and dramatized rendition of “Trouble,” one of my all-time favorites. I was impressed with how wonderfully she sings live. The biggest highlight of the show was when Taylor’s guest performer, Ellie Goulding, came on to perform “Love Me Like You Do,” and the whole crowd was up and dancing and screaming the lyrics together.

When the show ended and the crowd dispersed and the screaming stadium went silent, all I could say was, “I can’t believe that actually happened.”