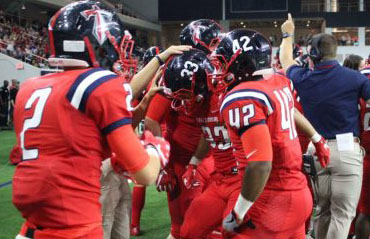 Journalism I class was assigned a project to reinforce the use of indirect and direct quotes and proper source attribution. For this assignment, the students interviewed each other in class and determined which students to be featured in their story. The class was given a topic for their interviews to help them determine questions, but the answers are genuine.

The topic for this assignment was simply, “Spirit.”

Do We Really Care About School Spirit?

Centennial High School, a campus awarded for its academic achievement, strives to involve students in events regarding school spirit to create a fun and personal learning environment. But is all that effort really paying off or are we still just numbers on a chart? As Bryce Ford, freshman, put it.

School spirit can be drawn from many places: sports, clubs, events, etc. These things help to form a community where we feel involved and connected.

“I wouldn’t have know anyone,” said freshman Lilee Simpson, as she describes her involvement with both the soccer and basketball team.

Not many other students share Simpson’s opinion however. According to freshman Jessica Mata, spirit is not necessary for learning and doesn’t affect her. School spirit can be shown by tee shirts and special days such as red out and wear neon on games days. But that is not for everyone and students such as Skylar Burke. “there is no energy what so ever”  Burke said. “Shirts and special days can be fun but don’t seem to influence school spirit.” Students just don’t seem to care about school spirit.

School spirit, do we have any? Depends on whom you ask. All my interviewees had one common theme. There is not a lot of it.

When interviewing sophomore Jessica Mata, who has been here one week, she told me there wasn’t really any school spirit.

Freshman Skylar Burke also thinks the school spirit is low. When she went to the freshman game the crowd energy was low. Burke said that the cheerleaders did try and the mascot helps.

School Spirit…How Can We Cheer Louder?

Centennial High School is really trying to amp up school spirit this year by motivating students to cheer for their school. They are asking students to wear Titan Spiritwear, join clubs, attend games, and cheer as loud as they can.

“We have a lot of school spirit,” freshman Anisha Zaman said.

There are a lot of groups to be involved in, such as marching band, color guard, or the dance team, that all serve to raise school spirit.

“Rivalry between schools has helped it [school spirit] a lot.” junior Alexandra Chandler said. She claims that competition between rival schools boosts spirit and really motivates students to be more supportive.

But, there is room to improve. Zaman suggested adding a more variety of clubs. A bigger variety would cover more student interests, which in turn will draw in a bigger crowd of club members.

“If you aren’t as involved in clubs or activities, you don’t have as much spirit,” Zaman said.

Another thing she proposed was making it mandatory to attend at least one social event a year, a field trip of sorts, so students can step outside their comfort zone and maybe find new interests.

“Not forcing, but a little push,” Zaman said.

Chandler mentioned that adding more group-based activities will have a positive impact. She alluded to her freshmen year spent at Independence High School, where they had many group based activities.

Students bring the most to school spirit, so it’s their responsibility to change things.

So, what are you going to do?

At a high school, one of the most important events for the student body is the football games and pep rallies. This fosters school spirit and unity, and makes people more supportive of each other. Saee Joshi emphasized the importance of Centennial’s school spirit.

She also recalls the clubs and organizations at Centennial.

“I see people coming together in clubs as a family,” Joshi states.

Her little brother goes to Curtsinger Elementary. She recalls how he talks to her about Centennial, the admiration for the “big kids” showing clearly.

“He came home one day and told us about one of their pep rallies, where all the elementary students chanted, ‘CHS! CHS!,’” she remembers. “I don’t think many people here have the same kind of school spirit he does.”

That is the kind of school spirit she envisions, one that will help bring unity and camaraderie to the students.

Centennial High has been trying to bring more school spirit to the table.  Is  the effort  paying  off?

Skylar  Burke  is  a  freshman  at  Centennial  High  School.  She  experienced  her  first  football  game  yesterday,  claiming  there  was  no  energy  in  the  stands.

A  sophomore  at  Centennial  explains  that  more  people  show  spirit  for  Hogwarts  than  Cen10.