The Truth about Columbus 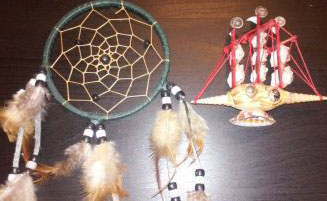 The dreamcatcher, a characteristic of the Native American culture, is defenseless toward ships of white men that sought to kill anyone who isn't like them. Photo by Laura Nicolescu.

Every year, we’re blessed with a day off in early October to celebrate the arrival of Christopher Columbus on Oct. 12, 1492.

The Italian explorer discovered the Americas. He sailed on the Santa Maria, Pinta and the Niña. He’s a hero, they teach us in elementary school. It’s true—he is a huge part of America’s history. But was Columbus a hero or a villain? Few know the truth.

The first Columbus Day celebration recorded in the United States was held in New York in 1792 to honor Italian American heritage and to mark Oct. 12, 1492, the day that Columbus and his ships first made landfall on an island in the Caribbean Sea. It was unofficially celebrated in a number of cities and states as early as the 18th century but did not become a federal holiday until 1937.

But before one can truly be educated on the heroic but murderous ways of Columbus, some myths about him must be debunked.

Columbus never set out to prove that the earth is round. In fact, according to the Washington Post, as early as the 6th century B.C., Pythagoras wrote about earth as a sphere, and historians say there is no doubt that the educated in Columbus’s day knew quite well that the earth was round.

In addition, as some of us probably know by now, Columbus didn’t actually discover America as we know it today. During his four trips that started with the one in 1492, Columbus landed on various Caribbean islands that are now the Bahamas, as well as the island later called Hispaniola. He also explored the Central American and South American coasts, but never actually reached North America.

Still, despite being able to debunk some degrading myths about him, Columbus’ legacy is a mixed one. He has been credited for opening up the Americas to European colonization as well as blamed for the destruction of the native peoples of the islands he explored. On the one hand, he failed to find that what he set out for—a new route to Asia and the riches it promised. However, in what is known as the Columbian Exchange, his expeditions set in motion the widespread transfer of people, plants, animals, diseases, and cultures that greatly affected nearly every society on the planet.

The Exchange also brought new diseases to the Americas such as smallpox from the Old World that decimated millions of the Native American population to mere fractions of their original numbers. The Americas were forever altered and the once vibrant and rich cultures of the Native American civilizations were not only changed, but lost, denying the world any complete understanding of their existence. Columbus is even blamed for Native Americans being referred to as “Indians,” a misnomer that alludes to Columbus’s wish to reach Asia.

But it wasn’t just disease that destroyed countless tribes and cultures. According to truth-out.org, Columbus justified rape, murder and pillage with religion and funded his efforts with whatever he could steal. He took Natives as slaves and had the arrogance to call them godless savages, uncivilized brutes and heathens. According to the Washington Post, Columbus saw profit in enslaving and selling native peoples kidnapped from Caribbean shores. Once he made allies among what he called “good Indians,” Columbus advocated fighting and enslaving native groups he presumed to be cannibals. Even “friendly” indigenous peoples were forced to mine gold, speeding death from malnourishment, overwork and disease.

All because he didn’t understand them.

All because of his racism and claim of white superiority that is still a problem today, though most prominent toward different groups.

Worst of all, Columbus used this to justify what is, in simple terms, a genocide. The word, defined as the deliberate killing of a large group of people, especially those of a particular ethnic group or nation, isn’t used lightly, but is the only word that properly describes Columbus’s actions towards the Native Americans.

It’s no wonder, then, that many Americans, not just Natives, are petitioning for the replacement of Columbus Day with “Indigenous People Day,” a debate that goes on every year but never seems to reach a consensus. Some states, however, have taken action. Since 1990, the second Monday in October has been celebrated as Native American Day in South Dakota. South Dakota is the only state to practice non-observance of the federal holiday of Columbus Day by recognizing Native American Day.

America, as a nation, should follow their example and show that genocide is never okay.

So this Columbus Day, Titans, look up from your Snapchat for a moment and think about why we really have this day off. Are we celebrating genocide, the wiping out of countless nations of people who didn’t do anything but look and act differently from what Columbus liked? Who were at fault merely for living? Or are we celebrating a national hero that deserves to be honored with parades, days off and reenactments of happy Natives welcoming Columbus to take over their lands?

Defining him as a hero depends on whose side you’re on.