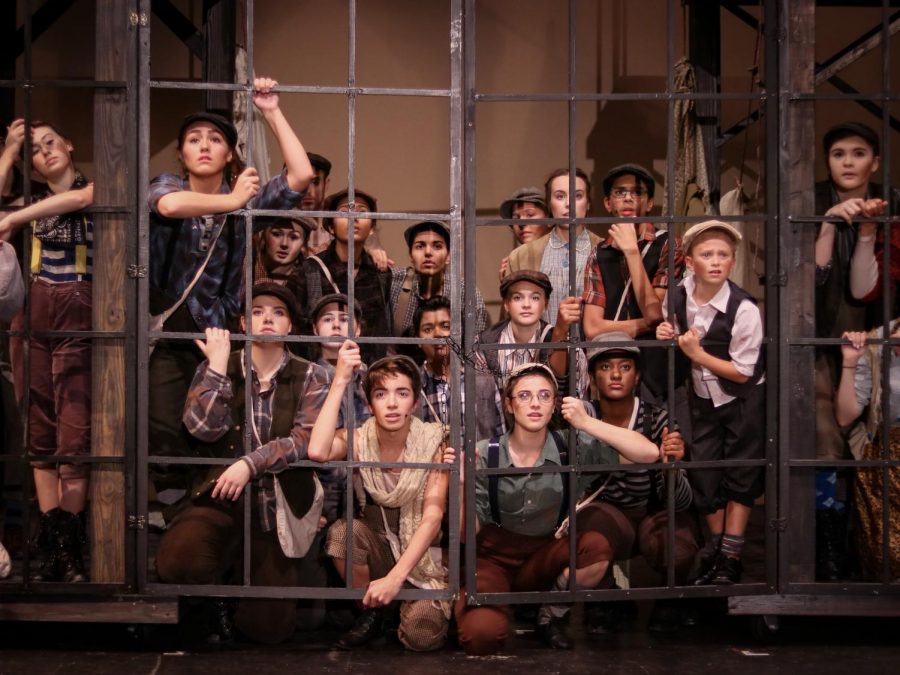 On Nov. 1 and Nov. 3, Titan Theater put on their very own production of Disney’s Newsies. It was phenomenal, from the costumes to the songs to the dancing. It could be easily inferred how much effort was put into this project, and every single character shined through.

Obviously, the story was beautiful. Being set during the turn of the 20th century, it weaves a tale about a courageous group of individuals lead by a humble leader in alliance against a newspaper price hike in New York City. It contains many masked aphorisms that can be applied to any aspect of life. It teaches the audience to persevere through tough times and to always fight for what is right.

Firstly, the acting was spectacular. Every student definitely had a passion for portraying their character, and despite this being a first gig for some people, it was clear how much talent they possess. From line delivery to facial expressions, I felt like I was watching real life Jack and Crutchie and the whole gang in 1899.

The actor’s voices were great. It was honestly a bit shocking, to encounter so many good vocalists all together, but this production has a habit of surprising me. The musical numbers were all very enjoyable and definitely added to the story, especially the reprises. My personal favorite was Carrying The Banner, just because it really conveyed the spirit of the newsies.

The dancers and the Newsies orchestra (made up of select Titan Band and Titan Orchestra members) were fantastic! The production was definitely a creative, artistic collaboration, and I loved how all of the arts were integrated. The music made the acting come alive and set the tone for majority of scenes. Furthermore, the dancers were incredibly energetic and made the songs more intriguing.

The most impressive part of the production had to be the set. The backdrop for the entire show, comprised of a screen that would alter its image depending on the scene and a newspaper border, was amazing! It was difficult to look away from the screen with a backdrop like that. The props were also very well made and manipulated. The Tech Theater deserves loads of praise for the sets.

Newsies: The Musical was very impressive and a huge success for me. Congratulations to all of the actors, dancers, orchestra, tech, and teachers for putting on a remarkable production. It deserves all of the hype it received.