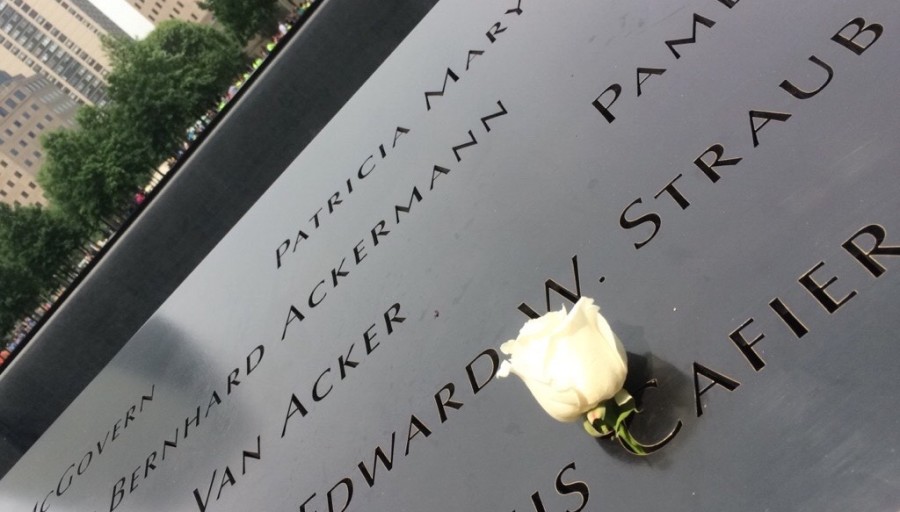 A white rose placed on the Memorial by another visitor on June 12, 2015.

With the 14th anniversary of the tragic occurrence of Sept. 11, 2001 we asked many of our teachers and administrative staff what they were doing when 9/11 occurred.

8:46 A.M.–Crash of Flight 11: Hijackers take over Flight 11 plane and crash it into floors 93-99 of the World Trade Center. Doing this killed everyone on board and hundreds in the building.

9:03 A.M.–Crash of Flight 175: The hijackers again take control Flight 175 plane and crash it into floors 77-85 of the second World Trade Center tower. Doing this killed even more people both in the airplane and in the building.

9:37 A.M.-Crash of Flight 77: Hijackers once again take over Flight 77 plane and crash it into the Pentagon’s western facade. which killed the 59 on board the plane and 125 military and civilian personnel inside the building.

9:59 A.M.-Collapse of the South Tower: After burning for 56 minutes the south tower collapses in 10 seconds flat killing about 600 workers and responders.

10:15 A.M.-Collapse of the Pentagon E Ring:The damaged section of the Pentagons’ outermost offices, which are known as the E ring,  collapses. Luckily no rescue workers were injured.

10.28 A.M.- Collapse of the North Tower:The North Tower collapses after burning for 102 minutes, killing about 1,400 people in the building and surrounding areas.

That day I was driving downtown Dallas to work at a company called Regus. I was exiting the highway and heard that a plane had hit the WTC tower. I thought to myself how awful the pilot must not have been able to see. Maybe it was raining or foggy? I wasn’t sure. As I listened to the reports I then started to realize this wasn’t an accident.

As I got into work I turned on the main TV in the office just as the second plane hit the second tower. I was in shock and just stood there watching. Everyone was glued to the TV once they arrived. I first called my parents to call and check on my grandparents who live in NY but all phones were down and we were not able to reach them until the next day to know they were safe.

My mom was in a panic because my dad was on a plane to fly out of Tulsa, OK to  Reno for a sporting goods show. My dad was on the tarmac starting to takeoff and a man’s phone rang.  The man in a suit who’s phone rang jumped up and ran towards the cockpit and starting banging on the door. All my dad could hear was that something had happened in NY and to the WTC towers. My dad being from NY started to panic and worry about his family there in NY. Instantly the plane was grounded and he sat on the ground for hours and hours not knowing what had happened or if his family was safe. They were finally allowed to get off the plane and make other travel arrangements since all flights in all cities were grounded.

My aunt, uncle and cousins also live in NY and we couldn’t get in contact with them for days.  Later I found out my cousin was working downtown near the trade center towers and as the first building collapsed he had to run and dive into one of the little shops on the street to take cover. My cousin was one of those who walked the streets covered in debris and scared for his life.

After hearing of the incident, the owners of Regus began worrying that other attacks in other cities might begin. Since we were on one of the top floors of the building in downtown Dallas they let us go home to keep us safe. I sat at home for hours in front of the TV watching the devastation in shock. It makes me sad since I used to travel to NY to visit family every year and we have been in the towers many times and have eaten at the Windows of the World restaurant at the top of one of the towers that rotates around in a circle so you can see the whole city as you eat. It gave me chills now remembering….

I was in Mr. Poehls Government class my senior year of high school when we got the news.  I remember it like it was yesterday!

As we asked many of our staff members what they were doing on Sept. 11, 2011, we were able to be there when they remembered. Take a look…