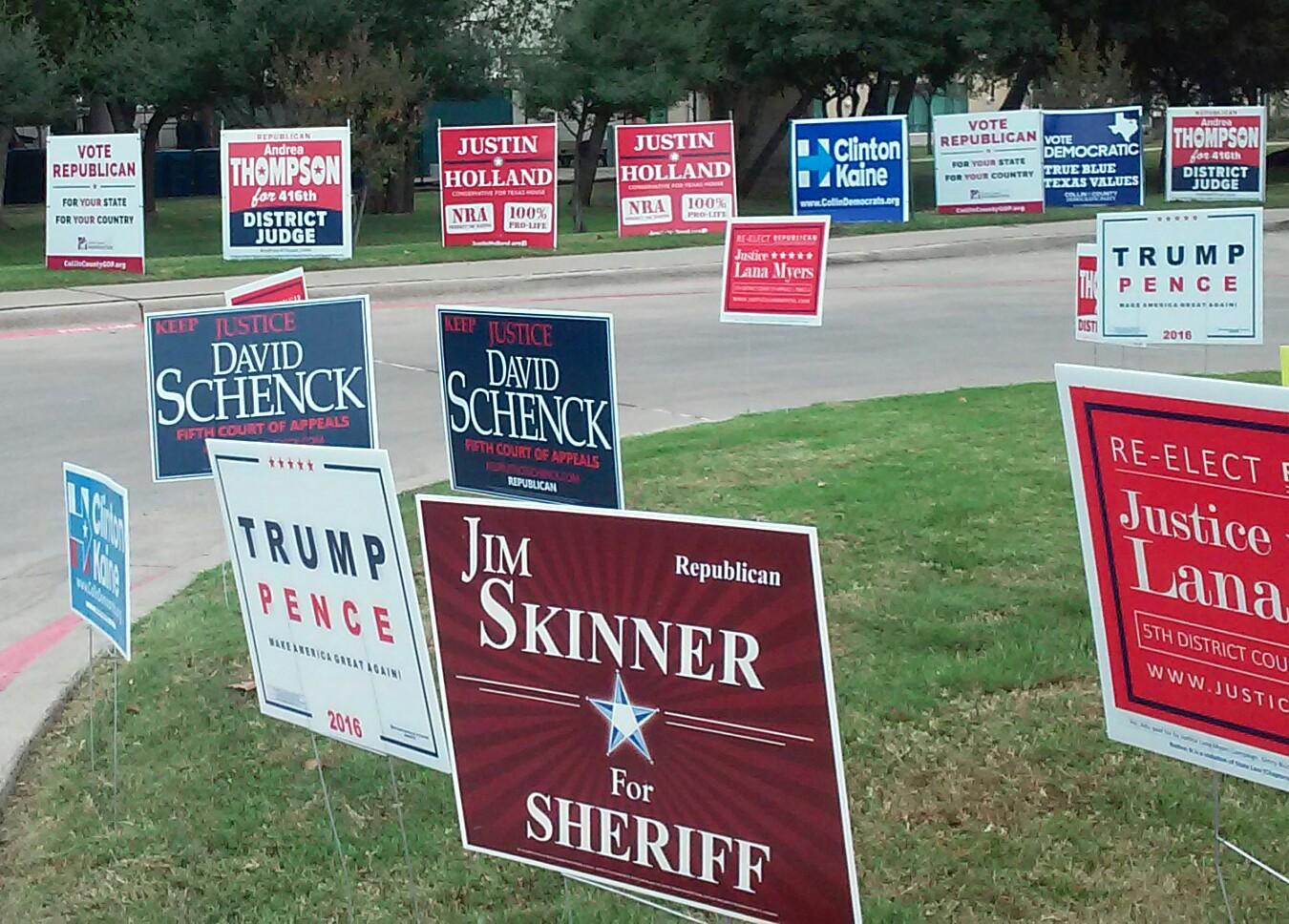 The Future of Our Nation

Although Clinton won the popular vote (by a small margin), Trump won the electoral vote and therefore the presidency.

Clinton was expected to win and become America’s first female president, but did not appeal enough to the minority voters and underestimated the voting power of rural America, costing her the election and allowing her ardent opponent, Trump, to pull off an upset.

Texas, although expected by some to turn blue, remained its usual hue and chose Trump as its candidate, giving him the state’s 38 electoral votes.

The campaign was one of the most negative in history, with considerably large disapproval ratings overshadowing both candidates. With the country divided more than ever, many are afraid of what’s to come in the future.

These are two students’ accounts about the direction they feel America will be going in for the next four years. 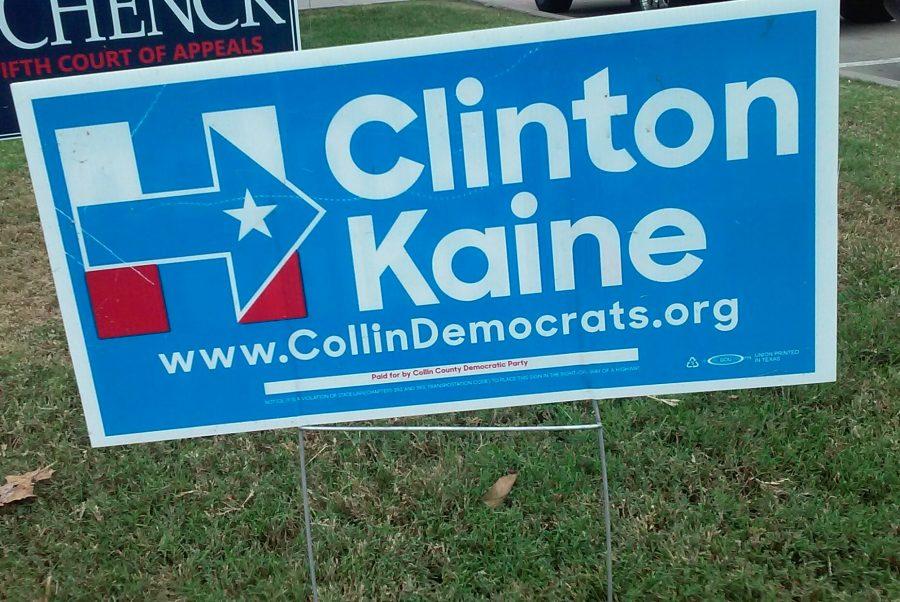 Ten days after the fateful election that named Donald J. Trump the next president of the United States, its bitter remnants are still evident. To the dismay of liberals around America, this election blocks the Democratic Party out of the White House, with Republicans soon to be in control of Congress in addition to the presidency, and marks the possible end of the Clinton political legacy.

Although nothing can be done to change the outcome, the election won’t be forgotten quickly. People around America, especially millennials and students, won’t merely accept the outcome without making clear their distaste. Senior Ally Dunford embodies this mentality and says her post-election feeling can be summed up in one word: disappointed, especially for the minority class.

A fan of Clinton since before she was Secretary of State, Dunford says Clinton advocates for the majority instead of just the top one percent.

“As someone who wants to go into politics in the future I find that extremely necessary and something that I look for in any political candidate, Democrat or Republican,” Dunford said.

She says there were two main things that stunted Clinton’s road to the presidency.

“I do think a huge factor was that she didn’t campaign in Michigan and Indiana, since those have always been liberal states, but she ended up losing in those states because that’s where Trump focused,” Dunford said. “I also think the FBI opening up her email scandal just a few days before the election definitely had an effect on last minute voters who were just trying to decipher between the 2 candidates.”

The media also played a large role in the election, says Dunford, dramatizing the scandals on both sides whenever possible.

“I honestly think the liberal and conservative media outlets exaggerated each of the political opponent’s flaws and never focused on the main issues,” Dunford said. “It shifted the focus toward sexual assaults from Trump and Clinton’s email scandal and what happened in Benghazi and they never really focused on the policies. That was definitely a fault of the media.”

Despite Clinton’s share of scandals, Dunford says she would’ve never voted for Trump.

“I don’t stand behind any of Trump’s policies,” Dunford said. “I’m most afraid of our foreign policy because he has no real background in foreign policy at all, or in politics for that matter. If I could vote, that’s why I wouldn’t vote for him, especially with the misogyny, disrespect and outright rudeness that stems from him. So from a political standpoint and a moral standpoint, I don’t support him.”

Dunford believes Trump’s uncoached look and speech gained him a lot of unprecedented supporters and drew a lot of people away from Clinton, a well-known figure in politics.

“I think the silent majority just wanted the non-establishment candidate,” Dunford said. “They want someone who hasn’t been in politics because they just think the whole system’s corrupt. And they liked that he just said it how it was.”

In a throwback to Bush v. Gore, Clinton won the popular vote but lost in the electoral college, a system Dunford says should be abolished.

With many furious about the outcome of the election, protests, both peaceful and violent, are erupting in major cities across the country, such as the Not My President campaign. Dunford, however, says that’s exactly the reaction Trump wants to get out of people who support Clinton.

Dunford says the most important thing the nation must do is come together and respect the outcome of the election, regardless of if we agree with it or not.

“You don’t have to 100 percent agree with the person but at least respect the position that our electoral college voted for,” Dunford said. “Although Trump doesn’t represent the will of the people, we still have to respect that he was elected into the presidency.”

From Rally to Reality 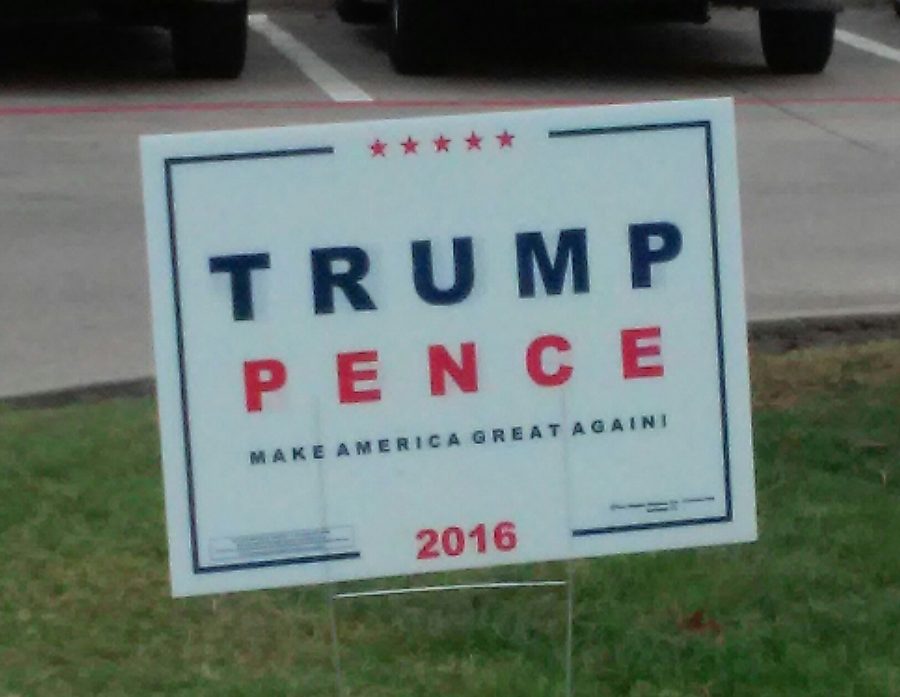 “Make America Great Again” has been everywhere we look for the past year or so, a slogan that eventually worked to persuade voters to chose Donald J. Trump as America’s 45th president. Many are surprised at the outcome, as according to USA Today, Trump is the first person elected president with zero government or military experience.

As an outsider and non-establishment candidate, Trump won over Americans who felt neglected in the past eight years, and those who would like to see the country move toward the “right” direction—meaning back to Republican, conservative values.

As a Republican, junior Lindsay Nellis says going back to such values are the reason she is supporting Trump.

“I definitely see our country turning back toward the conservative values that it used to possess, especially since our country has skewed so far left these past eight years,” Nellis said.

However, being an open Trump supporter hasn’t been easy for Nellis.

“I’ve experienced hate comments from people on social media and even in person because I support Trump,” Nellis said. “I think it’s because America has gone so long being a liberal country and has tried so very hard to teach our youth the left-wing ways, so when someone comes out against the norm, it isn’t taken correctly.”

She says Trump’s “say it like it is,” attitude is what drew her, and many people across America, to support him.

“The new approach Trump takes with America and the fact that he says what he really means is unlike most politicians,” Nellis said. “He doesn’t have any ulterior motives when talking to America. He’s real.”

Despite recently taking a less strict stance on some of the policies he plans to enact as president, Nellis predicts Trump will stay true to his word.

“I think Trump will stand with what he promised during the election,” Nellis said. “That goes back to the fact that he’s real and upfront with the American people.”

Trump’s many scandals have overshadowed the political atmosphere in this election and drew the attention away from the issues at hand. However, Nellis says everyone makes mistakes.

“When compared to the things that Hillary Clinton has done, Trump’s scandals are incredibly small,” Nellis said. “And we can’t forget the fact that Trump has publicly apologized for these so-called scandals.”

Spotlighting Trump’s scandals, the media also played a major part in presenting Trump to the American people in this election.

“The way the media treated Trump was very unfair,” Nellis said. “Most of the highly recognized media is completely liberal, so it showed the world only the bad things about Trump. In some cases things about him were blown way out of proportion and that goes back to the media’s role.”

Nellis also agrees with the electoral college system that was the decider in this contentious election.

“The electoral college is very fair,” Nellis said. “I agree with the process, and I’m glad the presidency isn’t based on the popular vote.”

However, many people across the country oppose Trump’s election as president and are making their feelings known through a variety of protests. Nellis says such protests won’t change anything, and hopes to see the country unite behind Trump.

“Complaining about the election outcome won’t do anything, and hating on someone definitely will only make things worse,” Nellis said. “It’s time for the American people to support and respect President-elect Donald Trump.”