When thinking of a school, students and teachers are the first things that come to mind. However, there are many other people who work for the school’s staff that aren’t usually thought of, as not many know who they are and what they do.

We go to class in the morning and go through our everyday routine without noticing these indispensable individuals. Without these people, though, the school couldn’t function as their role is vital. They are the “underdogs,” and the backbone of what makes our school great. This series of features is intended to bring light to some of Centennial’s lesser known staff and their jobs. 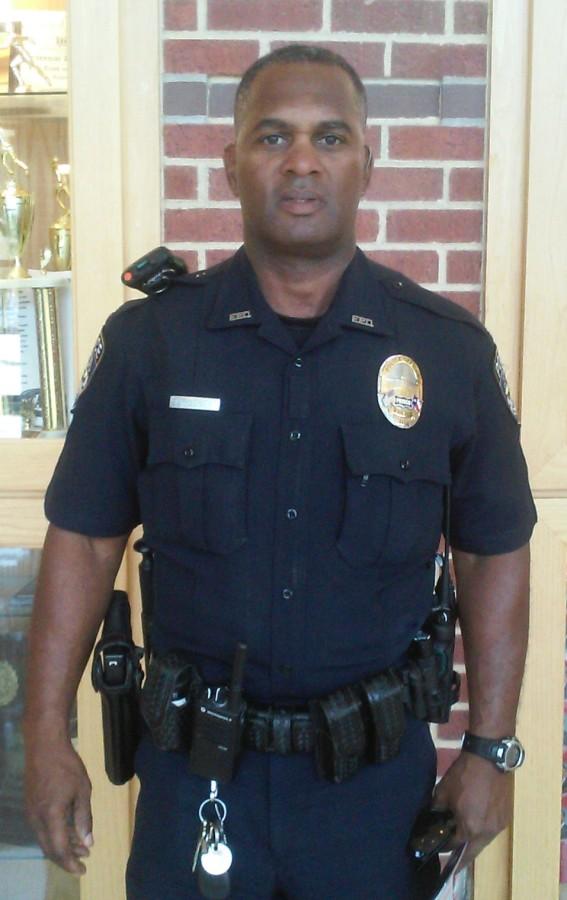 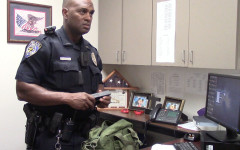 Decked out in a full police officer uniform, complete with handcuffs and a gun, the sight of Officer Avery Jones strutting out of his office in F Hall might be slightly intimidating to students, especially freshmen. There’s nothing to be afraid of, though, as Officer Jones’ job to keep the school safe is one he loves and does with passion.

Officer Jones decided to become a police officer when he was 18 years old with dreams of becoming an Ill. State Trooper. In Illinois, however, one has to either have military experience or be 21 years old to become a police officer, leading Officer Jones to a military officer position where he remained for 27 years. After the military, he joined the Frisco Police Department, and a few years later decided to move to high school to become a Student Resource Officer (SRO).

Officer Jones’ typical day is not much different from a regular police officer, except instead of patrolling the streets he patrols the halls of Centennial.

“First I pick up my vehicle, then come to school, monitor the halls, and view reports from the weekend to see if any kids were involved, and monitor lunch activity,” Officer Jones said. “It’s pretty much just a lot of walking and monitoring.”

Monitoring the halls is not as easy as it sounds, as danger can loom around every corner and appear at any minute. Officer Jones says it’s a police officer’s job to consider any situation to be dangerous.

Officer Jones says helping kids is what keeps him going.

“It’s an opportunity to change one life and have one less kid be involved in the criminal justice system,” Officer Jones said. “I enjoy getting up and coming to work every day.”

However, it isn’t always easy to get kids to do the right thing.

“The most challenging aspect of my job is trying to get kids to make good decisions,” Officer Jones said. “To not ruin their life before they have an opportunity to start it.”

Recently, the Frisco PD announced that they will be expanding their use of body cameras on high school SROs. Despite the addition, Officer Jones says that won’t be changing how he handles business.

If given the opportunity, Officer Jones wouldn’t change much about the campus as he said Centennial is a safe place. However, some more cameras around the school would be a helpful addition.

“As far as changing anything, it’s whatever I can do to enhance the security of the campus and add more cameras around the outside of the campus,” Officer Jones said. “I think it’s a safe campus, and I think that’s the most important thing.”

Despite the inherent presence of danger, bullets aren’t something an SRO generally encounters. Still, it would be pretty nice to be able to stop them.

“If I could have one superpower it would be the ability to stop bullets,” Officer Jones said. “To me that would be the most important thing, so I could be safe.” 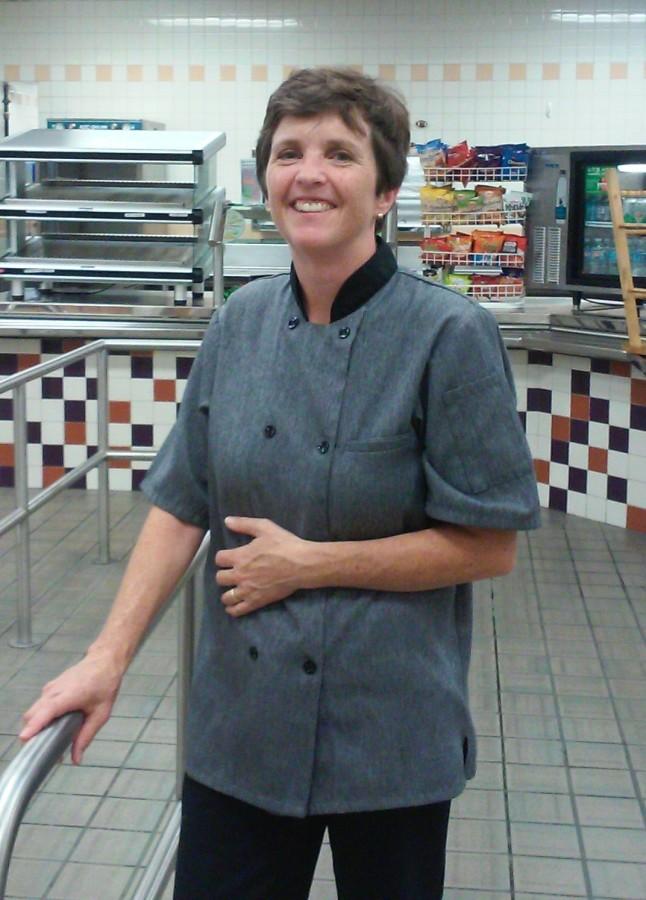 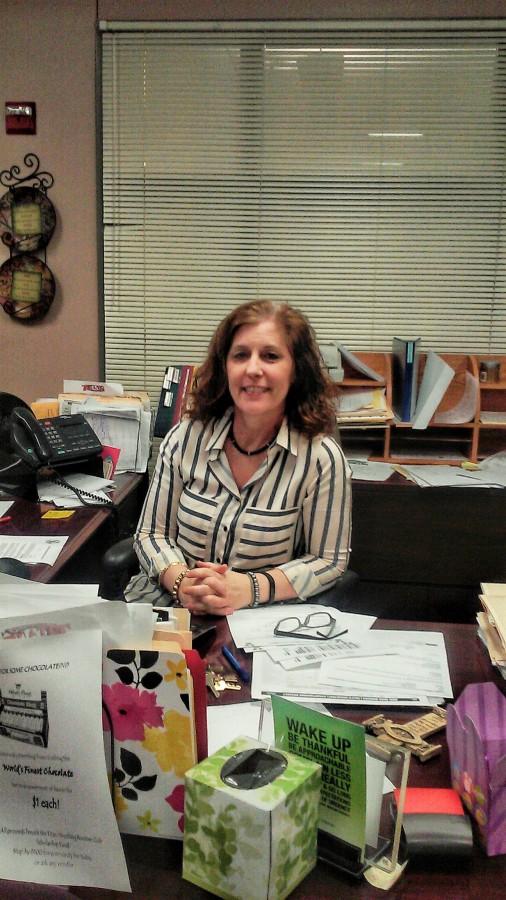 Destiny. The hidden power believed to control what will happen in the future. Whether or not you believe in these things, there’s no denying some things are just meant to be. And sometimes they are helped along by outside influences, such as… Frisco’s rezoning policies? While frustrating to many, they brought a passionate and hardworking woman to Centennial that our school would’ve never been the same without.

Tracey Curtiss, however, never intended to be a registrar as much as she just wanted to work at Centennial, making it her “home.”

“I was trying to get a job at Centennial so that my kids can come to this high school,” Curtiss said. “Where we lived they would’ve gone to three different high schools thanks to rezoning.”

However, once she was aware the position was available, Curtiss found it was perfect for her.

“I was very interested in the registrar position because there were a lot of public relation aspects to it and that was what my degree in college was,” Curtiss said.

Putting her degree to good use, Curtiss constantly deals with students who keep her busy all year, making no day of hers typical.

“In the beginning of the school year, I start four weeks before the students come back and I’m constantly enrolling new students, then the rest of the year is spent enrolling students as they move into the area,” Curtiss said. “I also withdraw a lot of students when they have to move to a different town or state and then I send out senior transcripts for every student that enrolls here.”

Curtiss’ work is admirable and demanding, as Frisco ISD is one of the fastest growing districts in the area.

“If the students are not coming from within Frisco ISD, besides sending transcripts I also have to build them,” Curtiss said. “We usually have between 150 and 200 plus students enroll in the school every year.”

Despite her taxing work, Curtiss loves working with us high schoolers and calls it the part she likes most about her job.

“I like helping students, especially high schoolers, probably of all of the students I could’ve worked with,” Curtiss said. “I probably relate better to the high schoolers than I would with the little guys in elementary or the crazy kids in middle school.”

However, Curtiss, like most of us, doesn’t appreciate arguing kids that hold her back, something happening more often than it should.

“What I like least about my job is when kids argue with me about needing something right away and not being able to get it. It should maybe be called push back more than arguing,” Curtiss said. “I don’t like when I tell something can’t be done yet to someone and they push back wanting it anyway, or question my job. I love my job because I’m able to help students, which if they follow directions is really easy to do.”

Hear that? Next time you’re at the registrar’s office, make her job easier and do as she tells you! Still, none of this takes away from Curtiss’ love for Centennial.

“I don’t think there’s one thing I would change about Centennial,” Curtiss said. “If I could change anything it would be Mr. Spain letting us wear jeans every Friday. I love working here, I love the people I work with and I know a lot of the students.”

Curtiss has personal connections to the school as well, as all her kids have gone here.

“I started working here when my oldest son was a freshman, so you get to know a lot of the kids and their families,” Curtiss said.

Curtiss is also a Titan wrestling mom (congratulations on the 2nd place finish at State, by the way) and sometimes struggles to balance her personal life with her work.

“There are times, especially this time of year when I have district tournament, regional tournament and state tournament every weekend and I’m not here a lot, Curtiss said. “I feel guilty when I’m not here and when things come up that other people can’t help with, which is really pretty hard, but for the most part the events take place in the evenings and on the weekends so it doesn’t interfere with my job too much. It’s just when you get to the end of the season and you have playoffs per se they take a lot of Friday and Saturdays and sometimes they’re out of town.”

Considering Curtiss’ busy schedule and her love for both work and family, an easier way to transport herself places would be a dream come true.

“If I could have one superpower, it would be the ability to teleport myself somewhere, because my kids are scattered now,” Curtiss said. “My oldest son has actually just moved home but he was in New Jersey in school for five years, and my daughter is at UT. I would love to just be able to teleport myself to wherever they are so that I could spend time with them and not miss a whole lot of time from here.”

“We were just trying to get a high school home,” Curtiss said.

And she did just that.